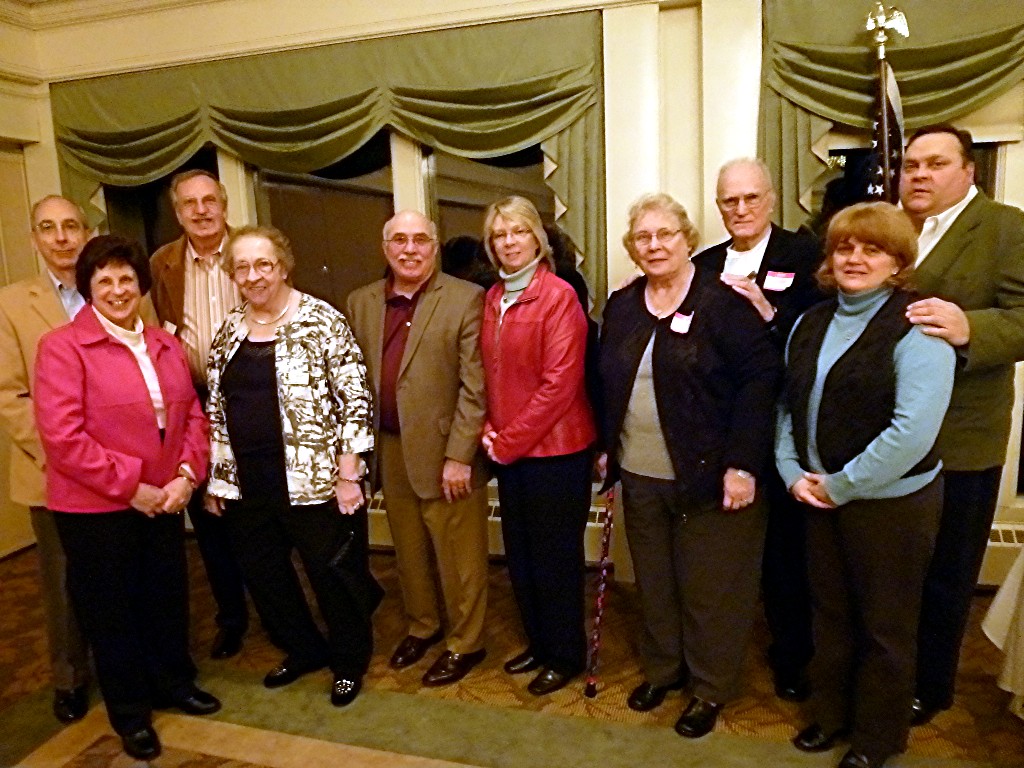 Founders and their spouses at the Twentieth Anniversary Banquet​

In January 1992, five garden train enthusiasts met at Myers Surveying Company in Bexley to discuss forming a garden railroad club. Those present where Richard Abler, Glenn Babka, Ron Mayer, Chris Myers and Phil Wilcox. We formed the Columbus Garden Railway Society (CGRS). As a result we contacted Marc Horovitz – then owner and published of Garden Railways (GR) – and asked for a list of subscribers in central Ohio. Marc provided us with a list of about 35 names. Glenn and Richard mailed out an invitation to an organizational meeting. That meeting was held on Saturday, February 29, 1992 in the cafeteria of Chemical Abstracts Service in Columbus. There where about two dozen attendees.

Thus CGRS began with about 15 families. Glenn agreed to handle money matters and Richard volunteered to write up the results of the meeting.  We were off and running. We decided early on CGRS would be an informal group with only one general guideline: “Have fun.” In lieu of bylaws the general rules of common sense and respect for each other would be the rule of the day.

Early newsletters were a single-column, no-frills typed pages. They were folded and stapled around the kitchen table, usually by Glenn, Barbara (Abler), and Richard. Later Bill Logan joined in and these sessions became policy-setting sessions. Barbara was interested in small plants and so wrote a gardening column for the  newsletter for some years.  Eventually she went on to write a gardening column for GR and for the LGB Telegram.

Shortly after founding, CGRS committed to participating in the Great American Train Show (GATS) at the Expo Center (Fairgrounds) in Columbus. With the show just a few weeks away Chris Myers, Glenn, and Richard met on a Sunday evening around Glenn’s kitchen table and hashed out what could be done for a display.  Glenn sketched out a track plan. we decided the height of the layout would be one foot – a compromise between the floor and the 42-inch height of the fine-scale modules commonly used at displays. The display would have a plywood trackbed and the infrastructure would be cardboard boxes and lids. Four plywood sheets were obtained and a crew of six (Abler, Babka, Logan, Bill Kelly Sr. and  Jr. and Fred Bischoff) cut and painted the plywood in the shop area of Marysville High School under the direction of Bischoff.

At our early GATS shows the infrastructure comprised of copy-paper boxes turned upside down and topped with their 4-inch high box covers. By placing covers slightly askew plants in typical 4-inch pots could be nestled in the interstices thusly created. Then by placing a layer of mulch over the covers, the plants would look naturalized. The display railroad was a success in two ways: the GATS visitors loved it and this project brought us together as a club.

Joan Obusek then convinced us to make a special display railroad around a Christmas tree at the annual Festival of Trees (a now discontinued event). The tree was decorated by Joan, Barbara, Richard, and Elaine Kelly. The tree was to be raffled off. It was a very popular display for kids at heart.

Sometime during CGRS’ second year Glenn Babka suggested we have a banquet. Richard suggested we have it on CGRS’ “birthday”, the last Saturday in February. The first banquet was at Schmidt’s Sausage Haus in German Village. Running trains around the floor of the party room was fun work that created hearty appetites for the good buffet food. We have moved banquet locations several times eventually settling on DaVinci’s and the Worthington Hills Country Club.

Over the years CGRS hosted a number of speakers at our banquets. We aimed to invite the “movers and shakers” in  the hobby:

Wolfgang – Inventor of LGB trains and owner of Lehmann in Nuremberg, Germany

(The Richters were guests of CGRS at a special banquet at the Maennerchor in German Village prior to the National Garden Railroad Convention in Cincinnati in 1995. CGRS railroads were open as part of the preconvention tour).

In or about 1992 Barbara Abler was on the Board of Columbus Recreation and Parks Department’s Horticultural Sub-commission, that group had been sponsoring tours of Columbus-area gardens for many years. The average attendance on a Sunday afternoon was 36 people. Richard suggested the Board consider having on the tour a garden with trains in it. The Board approved. The first year had two railroads, Abler’s Puddlefort & Patio and Babka’s Worth Valley Lines. The first year the P&P RR had 175 visitors. The Horticultural Board was amazed! For the next year’s tour there were six CGRS railroads open, then ten the following year, then more that a dozen each year since. Many visitors look forward to the CGRS open house tour every year.

Beginning in the late 1990’s Richard Abler organized some overnight excursions within Ohio, usually over Saturday night. These self-drive trips typically included visits to garden railroads, a trolley ride, or a scenic train ride, or a visit to a plant nursery and a Saturday night stay at a motel. These overnight trips were popular and paved the way for longer bus trips. Each year since 2002 CGRS has taken an excursion to ride trains, visit garden railroads and noted museums, and enjoy the sights. These bus excursions generally stay within a 500-mile radius and usually cover three or four nights. They are a highlight! And they are a relative bargain! The itinerary is skillfully crafted by Cecil Easterday who starts working a year ahead for each one. Generally they are scheduled in early- to mid- October. They sell out quickly.

The idea of having a busloads of garden railroaders swap visits with another garden railroad group originated with Frank Klatt of the Miami Valley Garden Railway Society (Dayton). The first such swap was between Dayton and Indianapolis. Later this idea was expanded to include Cincinnati and Columbus. These four cities take turns being the host railroads. Sometimes referred to as the “Four Club Bus Tour,” the tour is in fact open to other garden railroaders as a self-guided tour. (Or on one of the buses if space is available). Bill Logan organizes the tours for CGRS members and guests. The sequence of hosting is Dayton – Indianapolis – Cincinnati – Columbus. For the current year (2012) Indianapolis will be the host club. The tour generally follows the format: early-morning departure by bus, a joint lunch with the other clubs at a meeting hall, then picking up a snack bag for the bus, touring five or six garden railroads with a local-area bus guide who provides directions and a background of the railroads to be visited, then departing for one’s home city, optionally with a dinner stop.

The newsletter is the one thing all the members have in common. It is the tie that binds. For the first 16 years it was produced by Richard Abler, and since 2008 has been in the capable hands of Gail Klink.

In “the good old days” the only way to learn about garden railroading was to experiment by yourself or talk to people who had experience in the hobby. Thus joining a local, organized group or club was most important. The emergence of the Internet as a source of garden railroad information has changed that. Recognizing this situation, CGRS has embarked on a series of workshops or programs to provide what the Internet can’t provide, namely hands-on, or get-your-hands-dirty experiences. Thus the not-very catchy name, CGRS University. Recent examples include weathering techniques using chalks, learning to use an air brush, using a volt meter to troubleshoot electrical problems on a garden railroad, pruning a small dwarf conifer, and assembling then painting a small building using a Precision Plastics kit.

From a somewhat humble beginning CGRS has blossomed into a group of over 100 families mostly from Ohio, but with a few members from nearby states as well. Even as running and organizing a group of this size has become more complex, CGRS still adheres to its original idea of being simply a gathering of like-minded people interested in running trains and having fun. No officers, no bylaws. If you want to have fun running trains, join CGRS!

CGRS is proud to be a part of the Columbus – Dayton – Cincinnati triangle which is recognized by knowledgeable outsiders as being a hot-bed of garden railroading activity.

The CGRS membership includes some of the nicest people you’d ever want to meet!