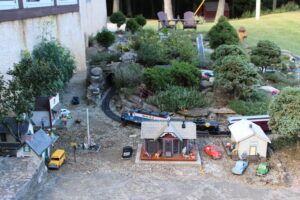 Puckerville is a 1960s small town community. The layout has two levels. Upper level has 80′ of track with bridges, tunnel, ponds, and a stream. Lower level is a coal mining line. There are many scratch-built buildings and 75 handmade people. Many herbs, ground covers, and dwarf plantings are used in the layout. 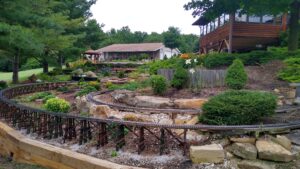 Shaded viewing areas, a gazebo, and two porches to enjoy while watching the action.  1,100+ feet of track, 10 feet of elevation changes to see everything. Partial wheel chair accessible.  Lots of off street parking. 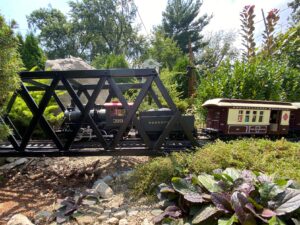 3  The Back in Time Railroad – Owner: Pat Waddell

The Back in Time Railroad consists of two trains running in two gardens. The first garden, where gnomes and fairies live and a second garden with scenes meant to transport you back to simpler time. 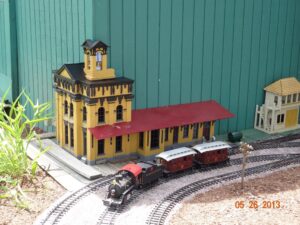 The layout has 300 feet of track, running three loops with battery power. It has many dwarf conifers and miniature perennials surrounding farm buildings, a campground and a replica Gettysburg train station. 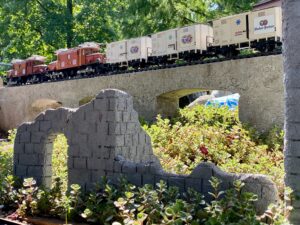 The Hacker Express Garden Railroad is a European themed RR making it’s sixth appearance on the tour. Many miniature plants accent this garden along with a picturesque new viaduct. Since it’s Fall that means Oktoberfest! Come hear the polka band and enjoy the trains either moving beer from the brewery to Oktoberfest on the mainline, or passengers taking a ride on the scenic cog railroad up Der Korkenzieherberg. Parking in the curb lane either side of Schrock Rd is permitted. 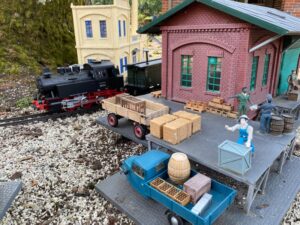 The Railroad travels varied areas – a small town, a logging camp, a fishing camp, and a manufacturing plant/freight plant. Steam engines from the past combine with diesels of the present. The railroad circles a huge oak tree – hence the railroads name. 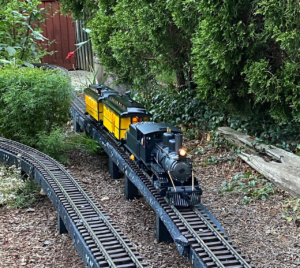 Started in 2018, our garden railroad was named for the neighborhood where we have lived since 1984. Tim has been a model railroader in N, HO and O scales since a young boy. Lisa is a master gardener through the OSU Extension and responsible for the garden designs. We both enjoy our hobbies and decided to merge the two. The back yard now includes; the original dog bone loop of last year of 200 plus feet, a new crossover loop of 230 feet through the side yard and a fence line point to point of 90 feet. Come and see our work on the gardens, the waterfall/ koi pond and train routes. 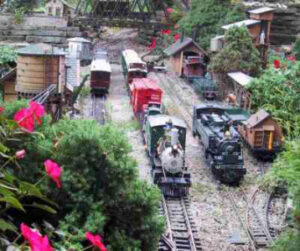 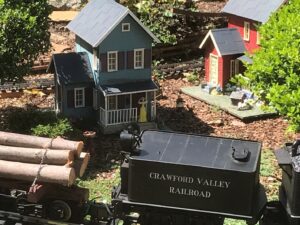 Since 2005 the Crawford Valley Railroad has served the towns of Crawford and Lily Pad Junction. The train winds its way past the Elk River’s upper and lower falls as it feeds into Lily Pad Lake. The river feeds the Millstream to run the waterwheel at James Frame Mill. The Elk River sawmill is supplied with timber from the surrounding mountains and delivered by the Shay engines designed for the job. The town of Lily Pad Junction boasts diverse industry from farming to wood working and textiles of all sorts. The 1880’s community knows how to work hard and enjoy their leisure as well. Don’t forget to stop by town gazebo and listen to the local jug band. In the town of Crawford, time has moved on to the 1920’s. Motorized vehicles are every where and the newest fascination is the moving pictures house. As you look across the way you will see the community where Thomas and Percy live. The people and children here depend on them to make deliveries and get them from home to work, the park and the country. Come join us for a relaxing afternoon when life was lived at a slower pace and the sound of the steam engine’s whistle sent a thrill through your spirit. 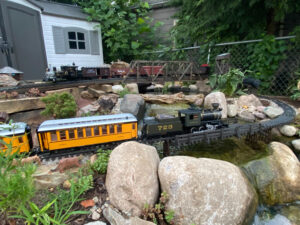 The Mad Apple Garden Railway is on the tour for it’s 3rd year and once again for the 3rd straight year has been completely renovated. The former layout was completely demolished as a 10 x 14 pond was added along with a double spill waterfall. The new layout includes a western town, a Native American village and 2 trains which pass over different levels of the waterfall. Come sit by the pond, relax and enjoy some trains. 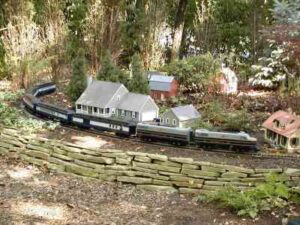 The Shelby and Sparta railroad was open to the public for the first time in 1998. Shelby, Ohio was my late husband’s home town and Sparta, Kentucky is my home town. Trains travel over 800 feet of track that goes through cities, suburbs and country. One of the buildings is a replica of the house that my Grandfather built and the one I grew up in. Other replicas include the Point Betsie Lighthouse on Lake Michigan where my family vacationed. Garden Railroading combines two things I love – trains and gardening. 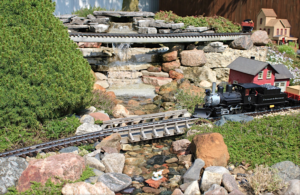 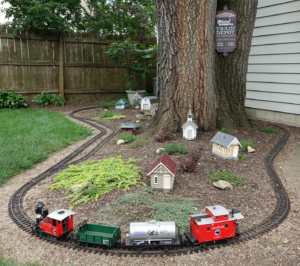 This layout was originally around a Christmas tree and moved outside  in 2018.  The track is a simple  14 X 20 ft loop with a sideline by the train station. The buildings represent a small farming community, with a variety of miniature trees, flowers and ground coverings. 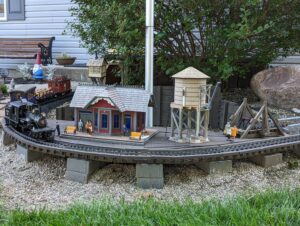 The Grove City edition of the B & K Railroad was started in 2018 with a single loop in front of the house. It expanded in 2020 to the south side and back of the house, and has acquired a theme of West Virginia logging communities – Hosterman, Durbin, and Cass. The B&K features a Climax engine (the engine used in Hosterman, according to a descendant of that family,) on the front loop, which represents that village. The railroad then winds down the south side of the house through the village of Durbin, and on to Cass in back of the house, which features a Shay engine, the primary geared locomotive used there.
Hosterman continues to grow and now has a point to point track from the train station to the sawmill / general store area.
The village of Cass is in the early stages of development.  Cass now includes a station and a “company house”, a sawmill, and a sand station before the big climb to the logging camp on the north end of that section (still in the imagination stage). A point to point line will connect the train station area to the logging area. 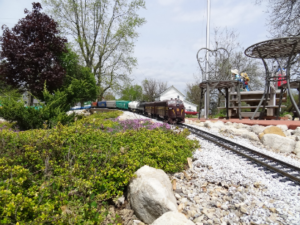 Our railroad is named The KPW Line, the Kiousville-Palestine-Warnersville Railroad which we started in 2006. It is about 1,000 feet, with three main lines that encircle two ponds and a sunken patio and a third loop around a lighthouse that sits over a underground lake (septic tank). There’s also a trolley that runs down the middle of the street where the town will be constructed once the depression is over. We have an inside trains storage yard. We run  steam and diesel engines and a railbus. We also have a rock garden and four flower gardens that the trains run through. We use track power for the  locomotives – all of which are radio-controlled. PLUS we have a live steam engine. 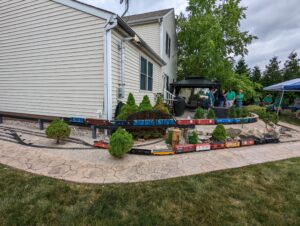 Started in the Spring of 2013, this railroad is constantly changing. Although this was a “maintenance year”, typically we add approximately 100 feet of track per year on average and the railroad has grown to around 500 feet. The Main line is all elevated, features many bridges and a trestle, and runs all the way around our house and through the garage!  We hope to see you in Marysville! 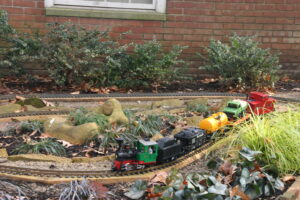 The Inniswood Metro Garden layout was built in 1998 and was restored in 2021, and features many miniature hostas. Trains run every Saturday and Sunday 11 AM – 4 PM,  May thru October by metro park volunteers. 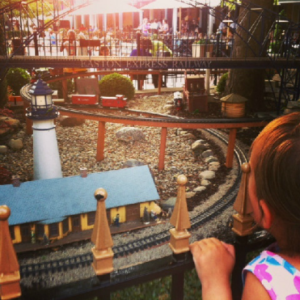